ONTARIO: Province to introduce bill to extend some emergency measures over the next year

Ontario's state of emergency is set to expire July 15 and Premier Doug Ford has said he hoped not to extend it again
Jul 7, 2020 7:16 AM By: Canadian Press 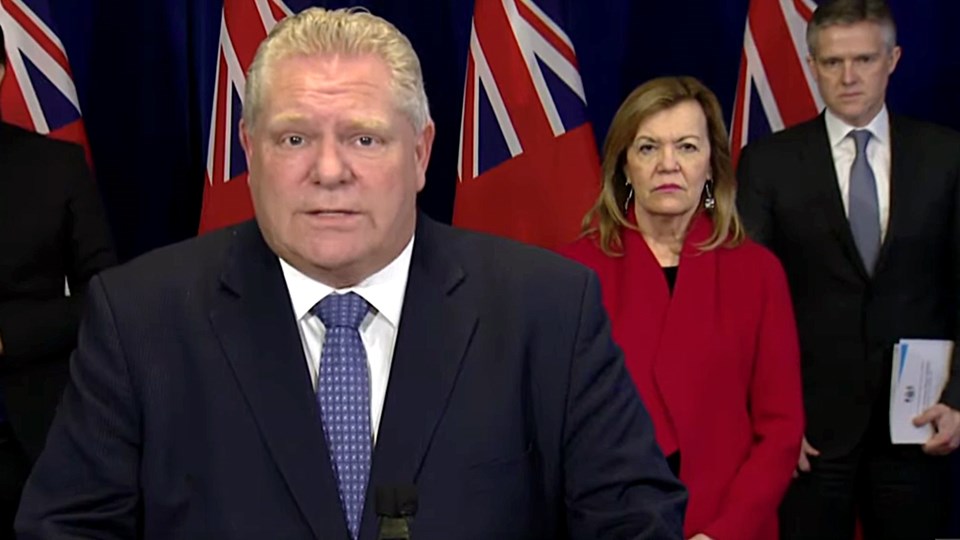 TORONTO — Ontario is set to introduce new legislation to enable the extension of some pandemic emergency orders over the next year.

Solicitor General Sylvia Jones says she will introduce the bill at the provincial legislature today.

The proposed law would allow the government to extend or amend some emergency orders a month at a time, with the law expiring a year after it's passed.

Under current legislation, the province can only issue emergency orders while the state of emergency is in place.

Ontario's state of emergency is set to expire July 15 and Premier Doug Ford has said he hoped not to extend it again.

If the bill passes, the government could move parts of the province back to earlier stages of the pandemic lockdown if required.

Emergency orders that permit the pick-up and delivery of cannabis and prohibit price gouging on essential goods will not be included in the bill, and will expire next week.

Ontario first declared a state of emergency March 17 when the province's COVID-19 cases began to increase.

It has subsequently issued a series of emergency orders that have been extended a number of times since the start of the pandemic.

Jones said the legislation is needed to "bridge the gap" between the strict lockdown and public health measures required to initially flatten the virus curve, and the less stringent conditions needed as COVID-19 case numbers improve.

"It allows us to transition away from the declaration of emergency, which is an important signal to people that we're on our way out," she said. "But it also allows us to ensure that — because frankly, we don't have a vaccine for COVID-19 — that we still can keep in place the important tools we need."

Jones said the bill will also introduce additional reporting requirements to bolster oversight. The government will have to report any emergency order extensions to a legislative committee once every month and table a report on the use of the law six months after it expires.

"We want to make sure that we're not over-using the declaration of emergency," she said.

This report by The Canadian Press was first published July 7, 2020.

BEYOND LOCAL: How to use therapeutic writing for empowerment without revisiting trauma
Jul 24, 2021 8:55 PM