ONTARIO: Guy drives down Thunder Bay Street with hood up 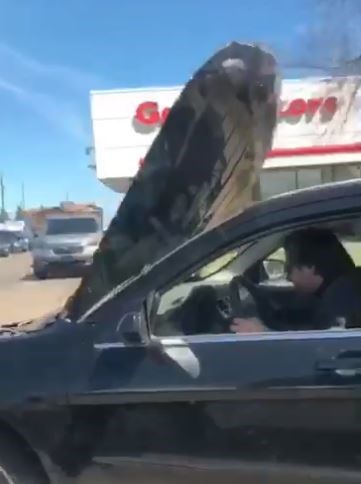 A video posted to YouTube on Friday showed a motorist driving down Memorial Avenue despite the raised hood blocking the windshield. (YouTube)

THUNDER BAY – Thunder Bay Police are enlisting the public’s help to track down a motorist recorded driving down Memorial Avenue with his hood up.

In the video, which was posted to YouTube on Friday but has since been removed, the driver appears to be navigating his way down the busy street by peering through a gap between the raised hood and his engine.

Traffic Sgt. Bill Pollock on Monday said he was shocked at seeing such a dangerous act.

“My first reaction was it was kind of a dramatic pause, as I imagine was most peoples. I can’t imagine someone actually doing that,” Pollock said, in an interview outside the Police Service’s Balmoral Street headquarters.

“It looked like he was working on the car. There were some cables in the engine block, and he chose to drive with the hood up. It’s a very dangerous situation. You could tell, even with the people who were videotaping, he didn’t even look over to address them, which makes me think he was total focused on trying not to run someone down.”

Pollock said the vehicle in question was a Chrysler, and he’s hopeful either witnesses or someone seeing the video, which had amassed more 45,000 Facebook shares by Monday morning, can identify the driver, who could be facing charges for the reckless act.

“We’ll continue to investigate to try to identify who that driver was. That’s beyond careless driving. You could even get in the area of dangerous (driving),” Pollock said.

“Obviously if he’d hit a pedestrian or struck a cyclist or other users of the roadway it would have been really serious.”

Anyone with information related to the case can phone police at 684-1200.

A proud Nova Scotian who has called Thunder Bay home since 2002, Leith has been the editor of Thunder Bay Source for 18 years and has served a similar role with TBNewsWatch.com since 2009. Twitter: @LeithDunick
Read more