ONTARIO: Guelph neighbourhood mourns the loss of man who lived in park

Jeff Eberhardt, who called Exhibition Park home for several years, brought love, laughter and light to the neighbourhood
May 9, 2018 3:05 PM By: Tony Saxon 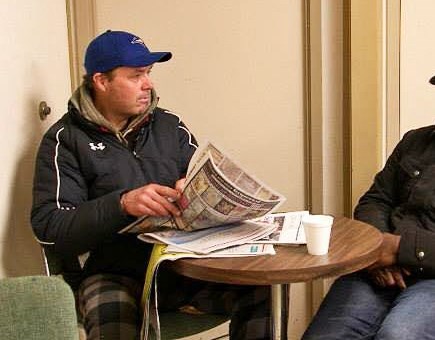 Jeff Eberhardt spent much of the past three years living in the spacious city park, sleeping on the bench near the concession stand.

He helped shovel pathways and the community ice rink in the winter, did odd jobs for the elderly, played catch and basketball with neighbourhood kids and kept an eye on houses when people weren't home.

You'd often find him watching hockey in the rink or softball on the diamonds.

You might come home to find your driveway had been shoveled.

Eberhardt embraced the park and those around it. Just as important, those around it embraced him, giving him food, clothing, kindness and friendship that truly helped make Exhibition Park his home.

Jeff Eberhardt was found dead in bed at a Cork Street room he recently moved in to. He was 49.

A memorial is in the works, appropriately to be held in the Exhibition Park.

"He brought light," says Beth Farley, one of the first neighbours who befriended Eberhardt.

"A lot of public might have walked past Jeff. A lot might have not considered him an equal. But he touched so many people. He had love, light and generosity in his heart and was a wonderful friend who made the neighbourhood a better place," Farley said, choking back tears.

The fact Eberhardt chose to make Exhibition Park his home isn't that surprising. The way the neighbourhood embraced him might be.

Farley and her partner met Eberhardt two years ago when they took him some food and warm clothing on a Christmas Eve. It was the start of a great friendship that would eventually see them put a storage locker in their driveway for Eberhardt to use.

Others brought him food, water and clothing. Some offered him use of their washer and dryer.

Eberhardt always chatted with neighbours and dog walkers in the park. He always carried his baseball glove in case he got the opportunity to play catch.

“Jeff was no saint, I’ll tell you that, but he was a hell of a guy,” said city councillor and Exhibition Park area resident Phil Allt, who befriended Eberhardt after getting calls from people about him.

“They didn’t want me to think he was a problem. They were just worried about him,” Allt said.

“He wasn’t homeless, he chose to live in the park. He preferred it,” Allt said.

On one frigid winter day, Eberhardt knocked on Allt’s door saying it was too cold and could he sleep in Allt’s backyard shed, which he did for a couple of nights, covered in sleeping bags, before returning to the park.

“It’s unbelievable the community he had and that gathered around him,” Allt said. “He was very, very likable.”

Eberhardt was born in Guelph and grew up just off Paisley Road near Silvercreek Parkway, where he lived with his mom and two sisters.

Friends say his father wasn’t around much growing up and he appreciated the kindness of the Big Brothers organization.

He was an excellent athlete, the “fastest kid in school,” a great catcher in baseball and enthusiastic bowler.

Friends say Eberhardt suffered a brain injury a number of years ago, beaten after coming to the aid of another person being attacked.

He had brushes with the law and could be difficult, stubborn and sometimes a little too profane.

But he was also kind, caring, intelligent and hard working, holding a number of part-time jobs when he was able.

“The neighbourhood took care of him,” said Sian Matwey, who befriended Eberhardt through her work at the Life Centre in Downtown Guelph.

“He was just a really sweet man. A very thoughtful guy. Intelligent and full of life.”

Matwey saw him a few weeks ago and knew he wasn’t well. He had lost a lot of weight and didn’t look like his old, robust self.

“We were all concerned about him,” she said.

Ed Pickersgill knew him for years.

“Jeff was a good guy who accepted his love of alcohol, independence, baseball, hockey and devouring information from books, magazines and newspapers,” said Pickersgill.

“He was a living embodiment of the song Amazing Grace,” Pickersgill said.

Robbie Kitchen grew up with Eberhardt.

“We were best buddies back then. We had a lot of good times together,” said Kitchen. “We’d sneak home at lunch and play at his house. He was an awesome guy.”

Kitchen remembers Eberhardt as a great athlete. The fastest kid in school and a talented catcher in baseball. He was also a great bowler.

The last time he saw him was a couple of weeks ago and he didn’t seem well.

“It hits you kind of hard,” Kitchen said.

“I can't count how many meals we've shared or mittens I have given him. He was a special man who touched so many people lives,” posted Charlene Downey.

“Jeff reflected ourselves to ourselves - a mirror in Guelph helping us learn humanity,” commented Ann Pappert.

Allt said a memorial is in the works that will allow those that knew him to share stories.

“A lot of people really want to remember him.”