This is the fifth time a black bear has come aboard without asking in a popular northern Ontario yachting spot
0
Aug 30, 2018 7:54 PM By: Warren Schlote 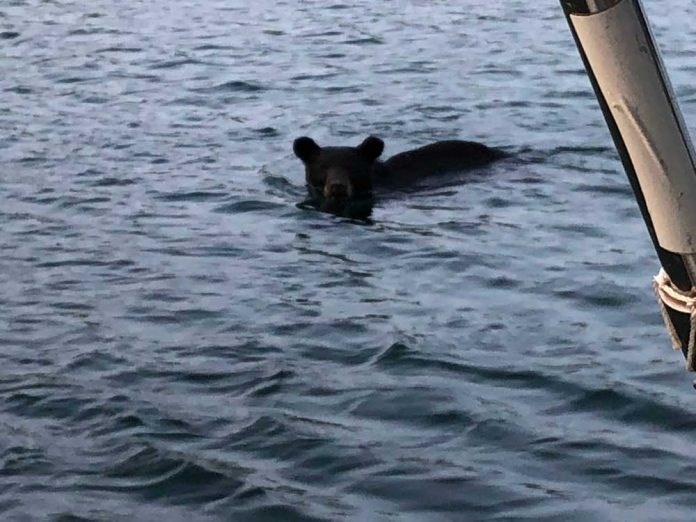 HEYWOOD ISLAND — The Heywood bear has boarded a fifth boat in the sheltered anchorage at Heywood Island, east of Little Current. This time, it set its sights on a 55-foot, wooden 1962 Chris Craft named AMARA.

Roy Nichols, from Traverse City, Michigan, anchored the boat at about 6:30 pm, and he had three other adults and two 14-year-old girls aboard. He estimates they were about 140 metres from shore in 15 feet of water. They were all below deck at about 10 pm when they heard a loud noise as a chair tipped over on the deck.

“I opened the companionway door and found a bear standing about six feet in front of me,” said Mr. Nichols, who described it as standing on its hind legs, about six and a half feet tall and weighing over 250 pounds.

“I closed the door and we quickly made a plan to frighten the bear off the boat. We gathered several flashlights and a halon gas fire extinguisher. I started spraying him with the fire extinguisher; he was sitting on the captain’s chair,” said Mr. Nichols.

The bear retreated to the back deck, but soon Mr. Nichols ran out of gas and dashed back inside to re-arm himself with a new extinguisher — there were fortunately five on board. This time, all four adults went outside to aid in the effort. They all made loud noises and Mr. Nichols blasted its face again with the halon fire extinguisher.

“He finally jumped over the back rail onto the swim platform. Then he stuck his head through the fairing board at the corner of the boat. I took that opportunity to rush forward and spray him from about two feet,” said Mr. Nichols.

The bear finally left their boat, but instead swam over to their dinghy and climbed aboard. They continued yelling and spraying, and eventually the bear jumped back into the water and swam away. Mr. Nichols said there was only minor damage to the boat.

“I think I’ll listen to Cruiser’s Net a lot more. They’ve known about it for a week, and if we’d know that we wouldn’t have gone there,” said Mr. Nichols, referencing the popular VHF radio program heard every day on channel 71 in the summer months.

Their neighbours in the bay were not Cruiser’s Net listeners, either. When Mr. Nichols went around to warn them, none had any idea that a bear had been causing havoc in the area.

Mr. Nichols and his family have since moved to Covered Portage Cove, which has a new problem of its own.

Brian Laux, whose photo and story The Expositor featured in last week’s paper, went to Covered Portage Cove, near Killarney, after he left Little Current. On Tuesday, August 21, several boats were once again boarded by another wild animal. This time, it was a bit easier to manage — an otter.

“All had cleaned fish recently which is likely what attracted the otter,” said Mr. Laux. “But at least it’s less threatening than a bear.”

Mr. Laux said it appears to be more of a nuisance than a threat at this point, being attracted to the smell of fish. This time, however, Mr. Laux was spared from a close encounter of the furred kind.

CANADA: Bilingualism on the rise among children
Jan 25, 2020 9:25 AM
Comments
We welcome your feedback and encourage you to share your thoughts on this story. We ask that you be respectful of others and their points of view, refrain from personal attacks and stay on topic. To learn about our commenting policies and how we moderate, please read our Community Guidelines.