So far this year, OPP official says they’ve seen about 60 to 70 instances of tires flying off vehicles on OPP-patrolled roads
Jul 5, 2019 2:26 PM By: Jessica Owen 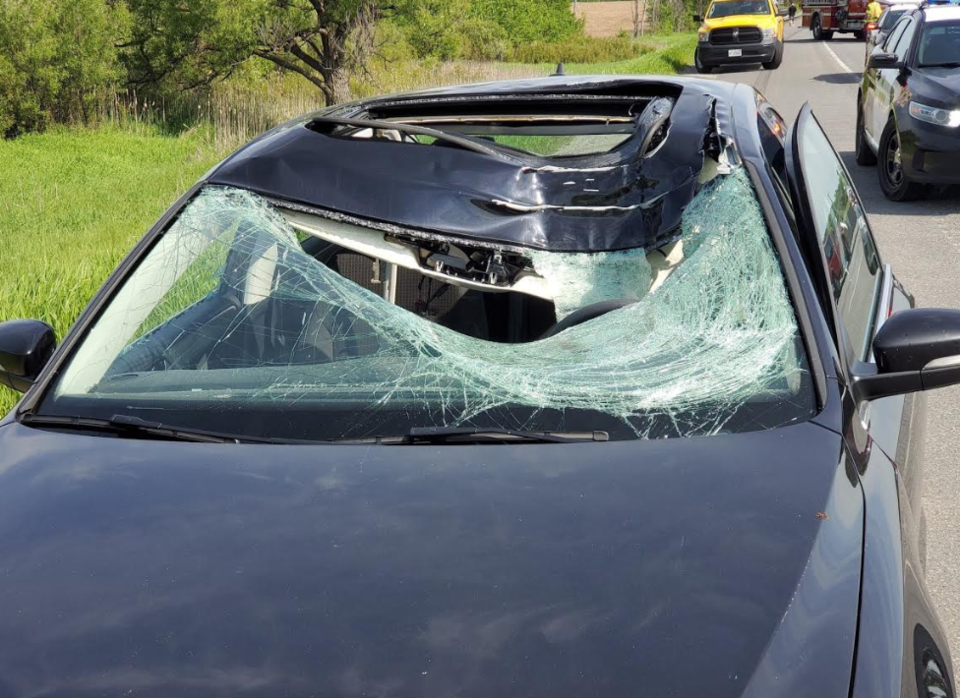 A 29-year-old Barrie woman suffered serious injuries and was airlifted to a Toronto hospital after her southbound vehicle was struck by a wheel from another vehicle in the northbound lanes. Photo supplied

A 56-year-old man from Barrie is facing charges under the Highway Traffic Act after a wheel on his vehicle became detached while driving on Highway 400 back on June 12, striking another vehicle and causing serious injuries.

The 29-year-old victim is now resting at home and is expected to make a full recovery after the errant wheel struck the passenger area and hood of her Volkswagen, then ricocheted off into the field or ditch.

The woman was airlifted to a Toronto trauma centre with serious injuries at the time.

Ontario Provincial Police Sgt. Kerry Schmidt indicated this week police would not be releasing the name of the accused.

“Since it’s a Highway Traffic Act offence, we don’t release the name for those,” he said on Friday, noting the man was charged with "detached part."

The incident happened south of Barrie between Highway 89 and Innisfil Beach Road.

"The front steering axle came off of the vehicle, bounced over the highway and entered the southbound lanes where it came into contact head-on with another vehicle that was travelling southbound," said Schmidt.

Last year, Schmidt says the OPP saw between 130 and 140 instances of tires falling off vehicles on OPP-patrolled roads.

So far this year, he says they’ve seen about 60 to 70 instances.

“About two-thirds of them come off passenger vehicles, and a third come off transport trucks or commercial vehicles,” he said. “So, it is something we see quite regularly.

"Unfortunately, tragically, it does result in serious injuries from time to time as well, as we’ve see here recently.”

Schmidt says he attributes the problem to tires being installed improperly, or not being tightened enough after maintenence.

“Oftentimes if you go to a shop, they’ll put on your invoice to come back to get your (lug nuts) tightened after you’ve driven for a day or 50 kilometres or so. That’s the best practice,” he said. “Anytime you have a wheel come off for maintenance, it needs to be re-torqued or rechecked after it’s been reinstalled.”

“That’s something we want people doing all the time,” he added. “We could be preventing a lot of these tragedies.”

- with files from Raymond Bowe

About the Author: Jessica Owen