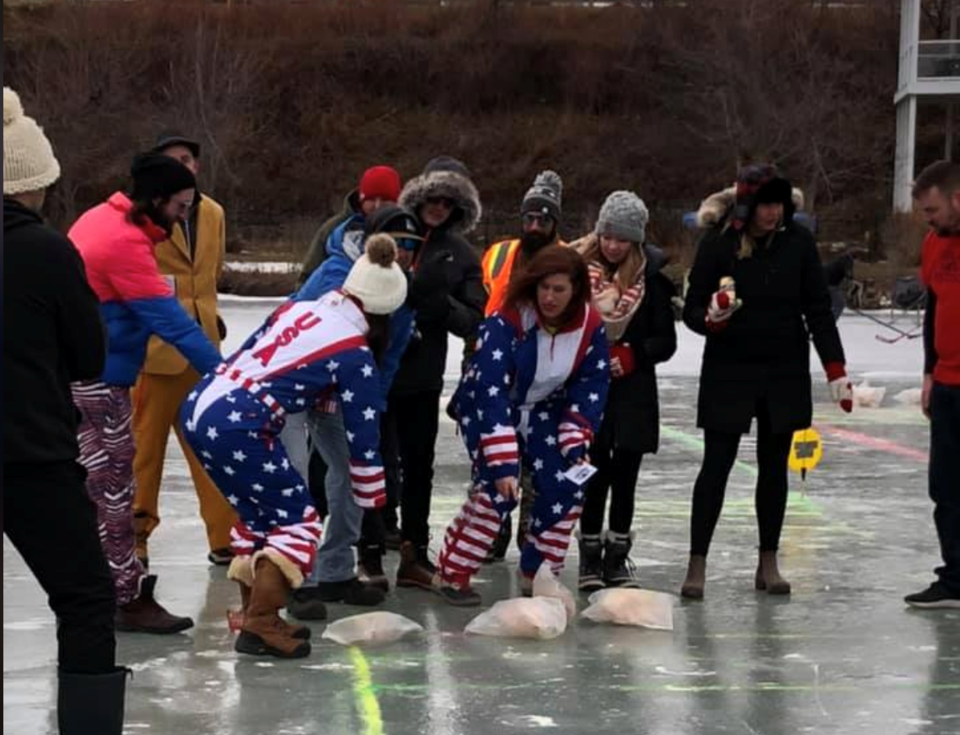 THOROLD - An animal rights group is hoping to crash a contest where the participants compete in throwing frozen chickens onto the ice for charity.

Port Dalhousie’s Kilt & Clover bar has been running their annual International Chicken Chucking Championships for 20 years and is gearing up for another day on the ice on Saturday, Feb. 16.

Teams of four sign up and pay a $35 admission fee per person to enter the league against other teams, competitively trying to land a double-bagged frozen chicken in the scoring area on the Martindale Pond.

Contestants, usually sporting colourful team-attire, are coming from as far as Washington, D.C to participate in the championships, but this year they might have more company on the ice.

Niagara-based At War For Animals, a group that says it is fighting “speciesism," a theory that any use or possession of animals for human gain is wrong, is planning to protest the championships.

“This event is disturbing. It’s objectifying these once sentient beings. Other animals shouldn’t be used for food or thrown around in a game. That is very offensive to us. What’s the difference in throwing a chicken and a dead human body around?" said co-founder Adam Stirr in an interview with Thorold News.

Since the event was announced, members have reached out to the bar on social media to try and stop the contest.

The group said if the event goes ahead it will be “aggressively protested."

“We are going to be there with the intent to be annoying. Once we are down there, people will be upset, and hopefully, afterwards, it might help open a dialogue with the owner about this," Stirr continued, saying they might bring megaphones and signs, but would keep within the boundaries of the law.

Shannon Prentice, co-owner of Kilt & Clover and organizer of the event said the bar has received phone calls and emails from as far away as Alberta as a result of the campaign.

“The tone is very aggressive, angry, concerned. A lot of it revolves around how chickens are being raised and treated. I understand that it is something that concerns all of us and that we need to talk about, but that has nothing to do with this," she said.

The contest started as a “silly little thing," but has now grown into a massive part of the bar’s all-year endeavour of raising funds for local charities, which among other things is done by food specials, with one dollar going into the donation bucket, handed over in December.

“Last year we raised $5,600 for Community Care. This year we are selling t-shirts and beer koozies too."

Prentice said the tensions with At War For Animals are unfortunate and that she is open for dialogue with whoever wants to discuss the concerns.

“It has always been a very relaxed, community event. That it is now turning into this nasty thing is really disappointing."

The Kilt & Clover says they sometimes opt for rubber chickens if the weather is above freezing, but that the forecast looks like it will enable another year of using the real thing.

The chickens will be donated to the Greg Frewin Theatre home to rescue tigers who will use them for animal food once the contest is done.

Activist Adam Stirr says that does little to dissuade the group since the tigers at the theatre are being exploited for human gain too.

He's not fond of the rubber chicken idea, either.

“It would be a small step in the right direction, but that is still objectifying animals. We would prefer they would maybe use bar stools or pushing each other down the ice," Stirr said.