Northern Ontario man is living out his dreams. This one involved a wheelchair-mounted crossbow

Paralyzed by ALS, Eddy Lefrançois is steadily crossing experiences off his bucket list, but this one was special — 'For me to completely forget I have ALS for days was a first'
Nov 22, 2017 2:51 PM By: Michael Erskine 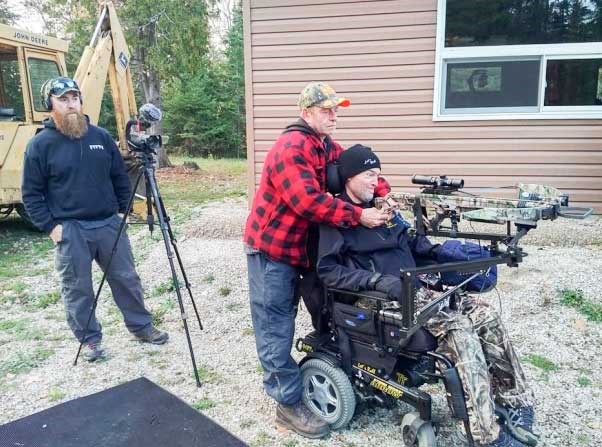 ALS survivor Eddy Lafrançois tests out his new crossbow mounting system as he prepares for his first whitetail deer hunt at a camp in Gore Bay. Photo supplied

It is a declaration of defiance of the odds and a determination that embodies the passion for life and true grit that has secured Mr. Lafrançois the title of “longest standing survivor of Amyotrophic Lateral Sclerosis (ALS, commonly referred to as Lou Gerhig’s Disease).”

This deer hunt season saw Mr. Lafrançois check off a seemingly impossible bucket list item (for someone who has been robbed of 90 percent of his motor ability) of bagging a whitetail deer.

“I talked to him about Eddy and what he is about,” recalled Mr. Debassige. What he discovered soon turned out to be a fellow traveller whose passion for life has transcended all challenges. “Eddy says he doesn’t know if his longevity is the result of sheer will and determination or luck, I think it is the former. He has a great outlook on life.”

Mr. Lafrançois’ website recalls his original diagnosis and a prognosis that would have proved shattering for most. “I started having weakness in my left hand in 1990, at the age of 21,” he writes, “and was diagnosed with ALS on Tuesday, April 14, 1992, just a month shy of my 23 birthday. My ‘Expiration Date Tattoo’ marks what was supposed to be my hopeful five-year life expectancy from diagnosis. I had three to five years to live in 1992; April 1997 (04.97) is five years after my diagnosis. The number 0497 has become important for me and my friends when faced with struggles.”

Mr. Lafrançois refused to accept his diagnosis and turned his situation on its ear. “I need to have that chip on my shoulder to keep fighting and to keep doing what I am doing,” he writes. “Would I change the last 25 years for the unknown? No, I would not, because of ALS I have lived some pretty exciting experiences and have met some incredible people. I am fortunate to be alive 25-plus years after diagnosis. I’m very grateful to have a wonderful family and great friends.”

Mr. Lafrançois’s website notes that “ALS is a motor neuron disease that attacks a select group of nerve cells and pathways (motor neurons) in the brain and spinal cord that are responsible for voluntary muscle function. When a person has ALS, the nerve cells of the brain and spinal cord gradually cease sending signals to muscles. This eventually causes the muscles to stop all function. As the muscles remain unused they begin to atrophy (die). As ALS progresses, muscle function fades away in the legs, arms and body until, finally, the chest and diaphragm muscles stop working. At this point the patient is unable to breathe without mechanical aid. Eventually, most ALS patients succumb to respiratory failure, most notably carbon dioxide poisoning.” He goes on to note that 80 percent of people with ALS die within two to five years of diagnosis, and between five to 10 percent may live 10 years after diagnosis, while others live only a few months, eventually unable to breathe or swallow.”

Mr. Lafrançois’s “bucket list” includes “whitetail deer hunt,” and that’s where Mr. Debassige and his crew came in. “Pat asked if I wanted to be part of helping to make that (bucket list item) happen,” he said.

So impressed with what he learned about Mr. Lafrançois was Mr. Debassige that jumped at the opportunity.

“I told him we could put up in-kind resources and production work (to help make a show about the hunt) — hopefully put it in one of our episodes of Fuel the Fire TV.”

So it came about that Mr. Lafrançois and friends arrived at Dan Poulin’s hunt camp in Gore Bay during the October archery hunt. A specialized blind had been constructed for the occasion on the site.

“It was quite an ordeal,” said Mr. Debassige, who described the equipment that had to be mounted on Mr. Lafrançois’s specialized wheelchair. “There was a swing arm to hold the crossbow and a battery-operated trigger with a tube that Eddy could blow into to fire the crossbow.”

Mr. Debassige brought his side-by-side four-wheeler to help get the nearly paralyzed hunter out to the blind. “He has lost about 90 percent of his muscle movement,” noted Mr. Debassige.

Mr. Lafrançois had an antlerless tag and on the first morning a small button horn walked into the clearing.

“I was videoing and Leo was in the stand with Eddy,” said Mr. Debassige. “Leo was lining up the crossbow on instruction from Eddy.” The shot went left.

“The deer took off, but it didn’t go very far,” said Mr. Debassige, “so they dismounted the crossbow and reloaded. He took aim again.” Once again Eddy’s assistant moved the crossbow on target through Mr. Lafrançois’s instruction. “The shot went low.”

At this point the whitetail deer decided it “had enough of these shenanigans” and took off into the bush.

“The same button horn buck came back,” said Mr. Debassige. “This time there was no fooling around.” The shot was on target and Mr. Lafrançois had another checkmark added to his bucket list.

“It was a powerful experience,” said Mr. Debassige. “Here I am trying to motivate people to get outdoors and here is this guy, with almost all of his motor abilities lost to ALS, and he is out there doing it. He doesn’t make any excuses for his living. It was an honour to be part of that bucket list.”

“This experience is one I will never forget,” said Mr. Lafrançois when contacted by The Expositor. “For me to completely forget I have ALS for days was a first — it has happened before but for minutes and once for 2.5 hours. I was so invested in the moment that I completely forgot I had this horrible, ruthless disease. I always say I can do anything, I just do it differently; case in point, my recent hunt adventure and being able to harvest a deer being a quadriparetic person.”

Mr. Lafrançois’s goal in life, aside from the bucket list, is to bring about greater public awareness of ALS. “He told me he wants to make it ‘treatable, not terminal’,” said Mr. Debassige. “He is fundraising to help give people greater access to proper equipment and to raise dollars for research.”

ALS does not define Eddy Lafrançois.

“I’m fortunate to have amazing friends,” he said. “I’m extremely lucky to be alive 25-plus years post diagnosis and my family and friends are responsible for that. Me, I just do what I know will make me happy, I do what I do to survive! For me surviving means to create as much awareness as possible for ALS, I want the world to know about the disease and we can do something to make it a treatable, not terminal disease by donating to the cause, a dollar raised is one more dollar that will help annihilate ALS. “

The ALS warrior’s approach to life is “you really don’t have to look far to find someone worse off than you are,” noted Mr. Debassige. “Eddy was just one of the guys, eloquent, outgoing and funny, just a great all-round person.”

“I’m happy Pat Dubreuil got in touch with Neil to document the adventure,” said Mr. Lafrançois. “Meeting Neil and spending time with him was a big part of me forgetting I had ALS for days.”

CANADA: Black reading lists are being widely shared, but what’s it like trying to find books for children?
Jul 12, 2020 8:55 PM