A viral video shows a man getting into a waiting police cruiser after purchasing drugs
0
Mar 1, 2018 9:28 AM By: Jeff Turl 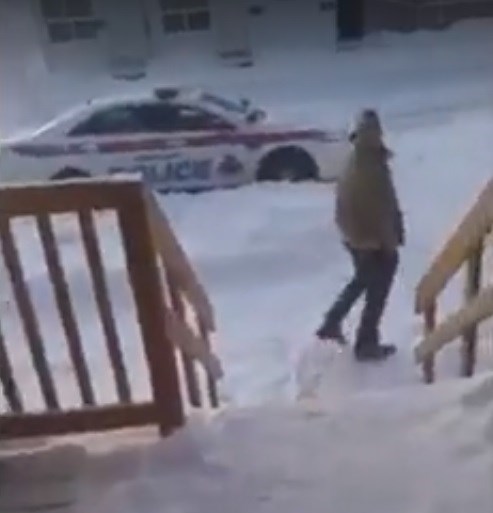 A North Bay police cruiser sits in the background waiting to give a ride to a man who video showed just completed a drug deal. Courtesy Anonymous North Bay.

Sources inside the North Bay Police Department tell BayToday that a viral video of an officer driving a man to a drug deal is the result of a good deed gone very, very wrong.

In the video, a North Bay police cruiser is seen outside a downtown house after dropping a man off. The man gets involved in a drug deal inside the Second Avenue house, and runs down a set of stairs, puts on a pair of boots, and jumps into the waiting cruiser. According to sources, both men in the video are well known to police.

The video, which has been viewed at least 20,000 times on various sites, starts with a man throwing punches and saying, "punched out five natives this week", before saying "No more cocaine for this little camper. No, just do a little bit of shards."

As the man gets into the police car the man with the camera says "Suspicious, very suspicious. Yes, you really did see this. F***ed up s**t."

Apparently, the female officer, a 15-year veteran, responded to a call from U-Need-A-Cab regarding customers who couldn't pay their cab fare.

The man asked the officer to take him to a friend's house to get the money to pay the fare, but the video clearly shows the man getting drugs while inside.

The officer then takes him back to the cab to pay his fare.

Chief Shawn Devine didn't return a call from BayToday seeking an explanation but instead issued a news release that said, “Although the contents of the video appear concerning on its surface, I am confident that this one-sided account of what is being alleged is totally inaccurate and a misrepresentation of the facts as they transpired on that day."

Devine says he is awaiting further details from investigators and will speak more on the incident upon completion of their investigation.

It's thought the video is a few weeks old.

In the past it has been against department policy to give rides to people except for victims.

CANADA: Military has located wreckage of helicopter and remains in Mediterranean
May 27, 2020 5:45 PM