Two police officers suspended without pay - Watch the video that has sparked outrage
Jun 5, 2020 11:35 AM By: Ludvig Drevfjall 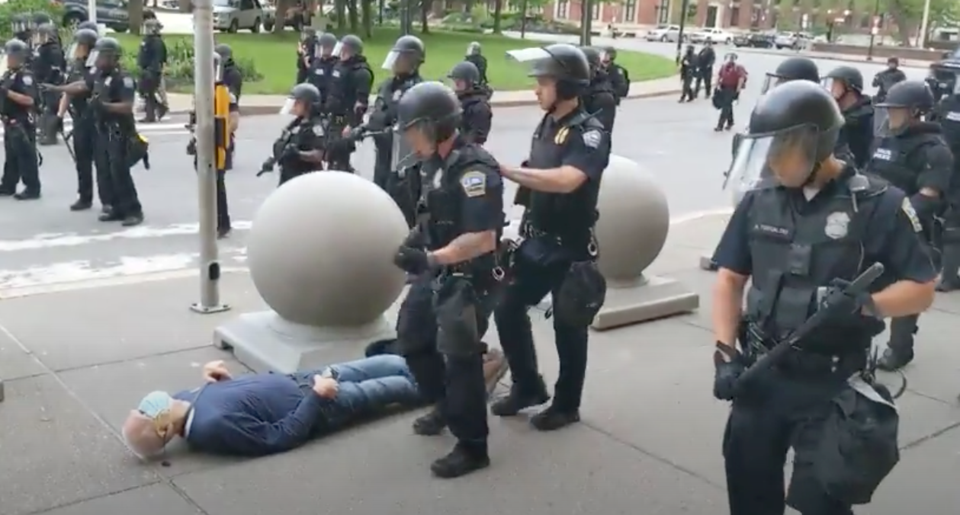 The man sustained lacerations and a concussion during the incident. Photo: WBFO/YouTube

Two Buffalo police officers are suspended without pay after an elderly man sustained head injuries after being shoved to the ground during a protest on the U.S side Thursday.

The incident, that was captured on video and later published by Buffalo NPR outlet WFBO, took place at Niagara Square as police were clearing Niagara Square from protesters.

An unidentified man is seen walking up to the approaching band of police officers that respond by shoving him back to the point that he trips and audibly hits his head against the pavement, where he is seen laying in a pool of his own blood as police continue their advance.

A statement from Buffalo Police initially claimed that the fall was an accident.

“A 5th person was arrested during a skirmish with other protestors and also charged with disorderly conduct. During that skirmish involving protestors, one person was injured when he tripped and fell,” a statement read.

After the video was posted on Twitter by WBFO, officials said a full internal investigation had been launched and the the commussioner of police had ordered the two officers captured on the video suspended without pay.

By Friday morning the video had been seen more than 21 million times on Twitter, prompting wide-spread outrage and condemnation of the incident.

WBFO reports that the man, who was taken from the scene by EMS sustained a concussion and lacerations but is expected to make a full recovery.

On Saturday, protesters on the Canadian side of Niagara Falls are planning a peaceful protest.

NRPS Chief of police Brian MacCulloch issued a video statement on Friday morning, stating he would walk with protesters.

Watch the video below - WARNING: Graphic

ONTARIO: Doug Ford gives support to Niagara MPP under fire for posing in tight crowd with no masks
Oct 26, 2020 3:37 PM