Ontario paramedic is positive he's been exposed to the virus, but is anxious about the prospect of deserting the family home in the final months before he and his wife welcome their first child
Apr 17, 2020 2:20 PM By: Canadian Press 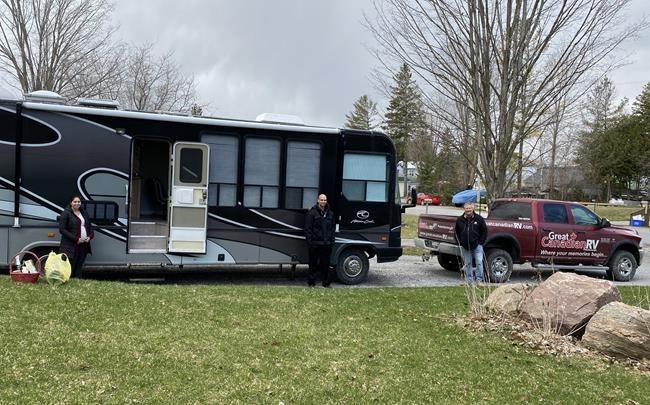 The only thing Rick Siewierski finds harder than protecting himself from COVID-19 is keeping his pregnant wife safe from the virus too.

The Ontario paramedic is positive he's been exposed to the highly contagious novel coronavirus, but is anxious about the prospect of deserting the family home in the final months before the couple welcomes their first child.

So when the 35-year-old got wind of a national effort to loan motorhomes out to health-care workers, first responders and anyone else working on the front lines of the fight against the global pandemic, he jumped at the chance to be part of it.

Siewierski is one of a growing number of essential workers seeking alternative places in which to preserve physical distance after venturing out into workplaces likely contaminated with COVID-19. Widely accepted public health guidance suggests that anyone who may have had exposure to the virus should self-isolate for 14 days in order to stave off further spread.

The workers' collective plight was what prompted Windsor, Ont., resident Ashley Oriet to try and establish a means of helping them out.

Inspired by efforts in the United States to match American front-line workers with RVs and other mobile shelters, the 30-year-old launched a Facebook group to try and establish a similar network closer to home.

RVs for Canada's Frontline has only been up and running for two weeks, but Oriet said requests for campers and offers of loaner RVs are pouring in daily from across the country.

A team of nine volunteer administrators manage the site, logging both front-line workers and would-be donors into a database and matching them up by region.

So far, however, Oriet said demand has greatly outstripped supply.

"We have a lot of requests, but we need to have more relationships with dealers and places that are willing to lend their campers out," she said.

Oriet said any and all volunteers are welcome, citing the need for individuals or businesses to help with related tasks such as waste disposal from RVs that are currently in use.

Al and Stacey Robinson, owners of the Great Canadian RV dealership in Peterborough, Ont., are among those that have already jumped on board.

The couple joined forces with Oriet's group after initially launching a similar venture on their own.

Stacey Robinson said they were spurred into action after receiving a request from a local doctor that they were initially unable to accommodate.

After reaching out to friends and procuring the desired trailer, she said they realized there was a vast, untapped market of RV owners unable to take their vehicles to parks or camp grounds now shuttered as a public health precaution.

"We kind of went, 'wait a minute, we have really great customers, and they're not allowed to use their units right now," Robinson said. "'I wonder if any of them would be willing to maybe lend.'"

Since then, the Robinsons have delivered RVs to nearly 30 front-line workers, travelling as far east as Ottawa in one case to ensure those in need of self-isolation spaces can keep themselves and their loved ones safe.

Siewierski, for his part, said a weight has been lifted from his shoulders now that he's in possession of a motorhome.

He said living in his own driveway for the foreseeable future will allow him to exchange greetings and eat outdoor meals with his wife, as long as they follow physical distancing guidelines.

"Obviously I want to be in my home and my home is the most comfortable place I can be," he said, "but this is a great second option."

This report by The Canadian Press was first published April 17, 2020.