CANADA: The losing economics of recycling

Recyclers are having a hard time getting rid of cheap plastic, paper and glass
Apr 30, 2019 8:55 PM By: Global News 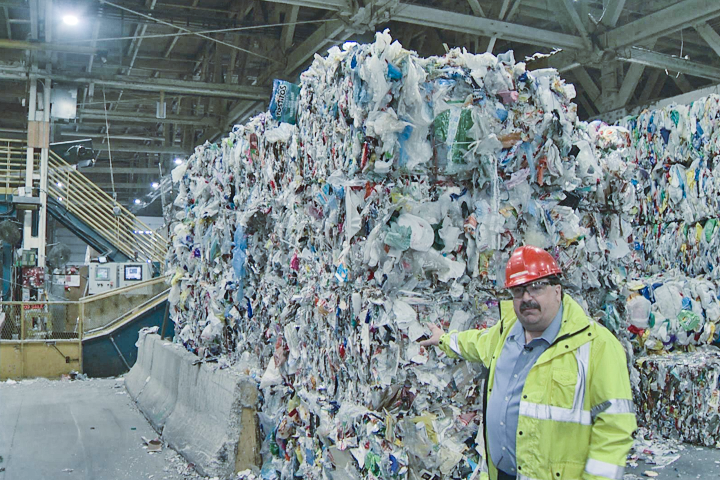 This is Part 2 in a three-part series investigating the state of Canada’s recycling industry. Read Part 1 of the series here.

At the Bluewater Recycling Association plant outside of London, Ont., an aluminum pop can is the most precious item they receive.

Selling these products is how recyclers make a profit — and aluminum is the moneymaker. Though it only makes up two per cent of everything that’s trucked into the Bluewater plant, the metal is worth 25 per cent of the company’s revenue.

And yet, even aluminum isn’t immune to an industry whose profits are plunging.

After China stopped accepting much of the world’s recycling at the start of 2018, the market was flooded with product. The dwindling number of buyers who are left demand only the highest-quality material — and at a fraction of the cost.

In today’s bleak new recycling reality, the price of commodities — like paper, plastic and glass — has tanked.

Some items, like cheap plastic, don’t even have buyers anymore. Recyclers are having to pay to get rid of them. And while recycling was never a money-making venture, the business model was feasible.

“Garbage and recycling is the number 1 rising cost that municipalities are facing right now. Higher than police or ambulance or medical or anything else,” said Amanda O’Neill, director of the West Yellowhead Waste Resource Authority, which handles recycling for 20 rural municipalities in midwestern Saskatchewan.

“The costs are going up and up exponentially.”

In Ontario alone, the average market price for mixed paper fell 110 per cent from August 2017 to January 2019. The values of newspaper and cardboard dropped 50 per cent each. Film plastic — the kind used in shopping bags — dropped 53 per cent.

Toronto has lost millions in revenue.

“We’re looking at a between $8-million and $9-million hit last year with our lost revenue,” said Matt Keliher, general manager of solid waste management services for the City of Toronto.

The sharp drop in profits has put municipalities at a crossroads: raise taxes or cut programs.

In Kawartha Lakes, Ont., where there’s no appetite for a tax increase, the city has backed away from teaching kids the virtues of recycling.

“Going into schools to try to carry the message of recycling, we’ve had to scale back on that,” said David Kerr, manager of the city’s environmental services.

The timing of the commodities crash couldn’t have been worse for the City of Thunder Bay.

When its recycling contract came up for renewal last December, the price more than doubled.

“Nobody’s thrilled, but at the end of the day, it’s … the new world that we’re living in.”

In the U.S., the financial burden of recycling has proven too great for some communities like Franklin, N.H., and Broadway, Va., which have cancelled their recycling programs. But in Ontario, that’s not an option: communities over 5,000 people are mandated by the province to recycle.

Exacerbating the financial problem are rapidly rising labour costs. Buyers who are still accepting recycling will only take the highest quality. Gone are the days when a greasy pizza box in a bale of cardboard or a piece of plastic slipped into a package of glass was passable. Now, plants are being forced to sort and sometimes re-sort products to meet stringent requirements, driving up manpower costs.

“It’s up 30 per cent, for sure,” said Lorenzo Donini, director of government affairs and municipal relationships for GFL Environmental in Western Canada. “That’s at a good plant that relies on a lot of optical sorters and modern technology … If you’re a plant that was based only on labour, your labour costs may have actually doubled.”

At some plants, they are considering adding staff to handle the strain.

“It’s become so much work for them to process the stuff twice,” said Holly Schell, Alberta operations manager with Environmental 360 Solutions.

“I just had a conversation today with our … facility supervisor and he said, ‘My guys, this is tough on them, and I don’t know what else to do. We’re going to have to rethink the process and revamp the hours we’re working and maybe get another team of people working a night shift just to try to keep up with it.’”

Realizing they’re going to have to spend the money either way, communities with deep enough pockets are trying to get ahead of the curve.

The Region of Peel, Ont., is investing $23 million in new sorting technology at its recycling facility.

“It’ll open up new markets, and we expect to get better pricing,” said Norm Lee, director of waste management for the Region of Peel. Lee expects the investment will pay for itself within five years.

The Bluewater Recycling Association plant is also investing in upgrades.

To Veilleux, its president, there’s no other choice.

“Brace yourself: this is not a temporary thing. If you don’t adapt and modify your facilities, your infrastructure and maybe refocus the materials that you actually collect that can be recycled, you’re gonna be in trouble.”

—With files from Christian D’Avino

This is Part 2 in a three-part series investigating the state of Canada’s recycling industry. Read Part 1 of the series here.