Budget documents show the Defence Department will fall short more than $2 billion on the government's plan to spend $6.5 billion
0
Mar 5, 2019 9:25 AM By: Canadian Press 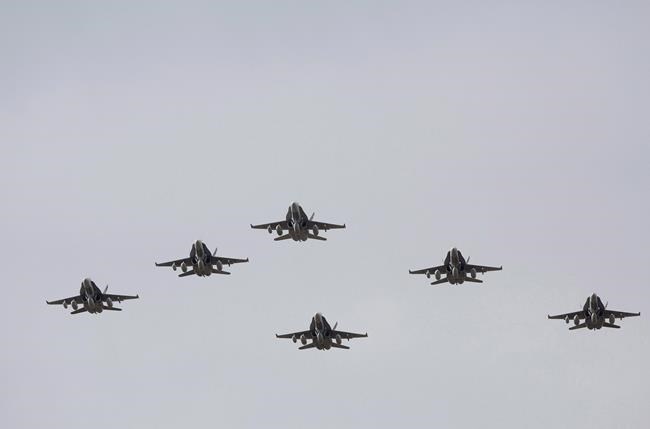 OTTAWA — The federal government will invest billions of dollars less in new military equipment than promised this year, raising concerns about the readiness of the Canadian Forces and the prospect that Canada will fall short on another NATO spending target.

The Trudeau government in 2017 released a defence policy that included dramatic increases in the amount of money to be spent on new aircraft, ships, armoured vehicles and other military equipment each year for the next two decades.

The investments are considered vital to replacing the Canadian Forces' aging fighter jets, ships and other equipment with state-of-the-art kit.

Yet while the government is on track to invest more in new equipment for the second year in a row, budget documents show the Defence Department will still fall short more than $2 billion on the government's plan to spend $6.5 billion.

The government spent $2.3 billion less than planned last year, largely because of delays in projects such as the government's huge plan to buy new warships, though also because some things ended up costing less than expected.

The department's top civil servant, deputy minister Jody Thomas, told a House of Commons committee last week that about $700 million was because some projects came in underbudget and other "efficiencies, so we didn't need that money."

But Thomas acknowledged the department was to blame for some of the other underspending and industry has also faced challenges in delivering on projects — though she said it shouldn't be a surprise there have been some problems given the number of projects underway.

"There are going to be some slowdowns by us," she said, adding: "If money isn't moving quite quickly enough because of a problem with a particular supply chain, a particular supplier, a contract, the way we've defined a project, we work with industry to try to resolve that."

Still, Defence Minister Harjit Sajjan acknowledged to the same committee that while the government is spending more on military equipment than previous years, "we need to get enough people to be able to handle the volume of projects. We need to get better at that."

Defence officials have previously blamed a shortage of procurement experts for some project delays and cost overruns. That shortage was created by successive cuts to the department starting under the Liberals in the 1990s and continued under the Conservatives earlier this decade.

While the fact the department saved money on some projects was seen as a positive development, Conservative defence critic James Bezan said he is nonetheless concerned that hundreds of millions of dollars in promised new investments aren't being realized.

"Despite the explanation that was given by officials at committee, we still feel projects are falling behind, promises are going to be broken and ultimately the Canadian Armed Forces will not get the equipment that it needs in a timely manner," Bezan told The Canadian Press.

"The whole idea that they're finding efficiencies is good news. But at the same time, those dollars should be getting re-invested in other capital projects that aren't off the books yet."

Thomas did not say which projects will be affected by the underspending.

All members of the military alliance agreed in 2014 to spend two per cent of their gross domestic products on the military within a decade — a commitment that has since taken on new importance with U.S. President Donald Trump's demanding all NATO allies spend more.

While Canada has long resisted that target and the Liberal defence policy shows spending only reaching 1.4 per cent of GDP by 2024-25, the Liberal government has said it will achieve another NATO target to direct 20 per cent of defence spending to new equipment.

"So the military is not getting re-equipped as fast as intended when the defence policy was published," Perry said in an interview. "And we had basically reassured NATO that we were going to really do a good job at spending on recapitalization, and we're not nearly as far ahead as we should be on that."