Canada's contribution includes $180 million to address the immediate humanitarian and development impacts of the pandemic and $120 million towards a new initiative called the Access to COVID-19 Tools (ACT) Accelerator
Jun 29, 2020 7:14 AM By: Canadian Press 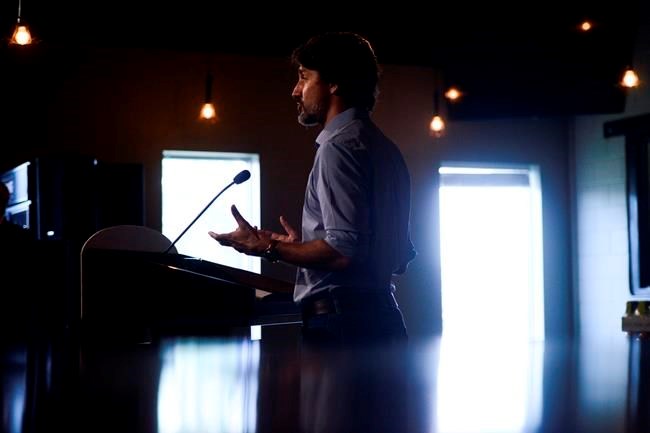 OTTAWA — Canada contributed $300 million on Saturday towards the international fight against COVID-19, as Prime Minister Justin Trudeau joined fellow leaders, activists and philanthropists in calling for a vaccine to be distributed to the world's neediest people.

Trudeau announced the new funds in another virtual international fundraiser — this one sponsored by an organization, Global Citizen, that raised almost $9.5 billion in pledges.

"COVID-19 has changed the lives of people everywhere, and it has highlighted inequalities around the world," Trudeau said. "None of us have been spared from the effects of COVID-19 and none of us can beat it alone."

Canada's contribution includes $180 million to address the immediate humanitarian and development impacts of the pandemic and $120 million towards a new initiative called the Access to COVID-19 Tools (ACT) Accelerator.

The ACT Accelerator was created in April by the World Health Organization, the French government, the European Commission and the Bill and Melinda Gates Foundation to ensure equitable access to medical treatments. It supports organizations, health professionals and businesses in their efforts to develop a vaccine, as well as drug therapies and diagnostic tools to battle the pandemic.

Trudeau said the pandemic has hit vulnerable populations especially hard and the ACT Accelerator will ensure that when a vaccine is found, it will be able to reach all the people who need it.

"We're also committed to working with countries around the world on how we can pool procurement efforts to make sure all countries have access to the vaccine," said Trudeau.

Sir Andrew Witty, the former chief executive of the British pharmaceutical giant GlaxoSmithKline, said a vaccine would normally take 10 to 15 years to develop, but the COVID-19 outbreak is forcing companies and universities to find one or more viable vaccines in one-tenth that time, or quicker.

"This is a really, really difficult thing to try and achieve. We're all giving it our absolute best shot, but there are no guarantees," Witty told the conference.

"No country can be an island in this situation. It's not great to be the one country who's safe if all of the people you trade with are still struggling because the trade is not going to be there."

There has been widespread concern that President Donald Trump might adopt a go-it-alone approach if a vaccine were discovered in the United States first.

However, Trump's ambassador to the United Nations, Kelly Craft, offered an olive branch to the conference when she announced Washington's new pledge of almost $750 million.

"Together we must work in an open, transparent and supportive manner to build a safer, more resilient world," said Craft, who previously served as Trump's envoy to Canada.

"We must be the true multilateralist in the best in sense of the word, working toward the common good."

Julia Anderson, the chief operating officer of the Canadian Partnership for Women and Children's Health, said the ACT Accelerator is the "robust mechanism" the world needs to co-ordinate the fight against the pandemic while supporting the existing health systems of vulnerable countries.

"It's shaping up to be hopefully the one-stop shop," Anderson said, adding that the ACT is very much a work in progress. "The plane is being built as it is being flown."

Her group and two anti-poverty organizations — Results Canada and the One Campaign — say Canada should be devoting one per cent of its overall COVID-19 spending programs to international assistance.

They say that would require a boost of at least $1.5 billion to Canada's foreign-aid budget, which stands at about $5 billion.

"Today's pledge was significant but we're still far from hitting that mark. But this is a marathon not a sprint, so we trust there's more to come and (we) will keep pushing for Canadian leadership," said Chris Dendys, the executive director of Results Canada.

The aid agencies and anti-poverty groups are crediting International Development Minister Karina Gould for being one of the strongest advocates they have seen for their sector around the federal cabinet table.

"We are happy to see Minister Gould pushing for more investment because more is desperately needed," said Stuart Hickox, the Canadian director of the One Campaign.

Gould has repeatedly stressed that Canadians' safety is linked to the success of stamping out COVID-19 abroad, and that there can be no rolling back of existing spending, or else there could be new flare-ups of preventable diseases such as tuberculosis, polio and malaria.

"What keeps me up at night is not just the immediate needs of the pandemic, but the collateral damage if we turn our attention away from our core activities," Gould told The Canadian Press on Friday.

Global Citizen bills itself as the world's largest anti-poverty advocacy group, and it organized Saturday's pledging conference as well a star-studded evening concert that is to be livestreamed across the world.

This report by The Canadian Press was first published June 27, 2020.