Blue Mountain Resort did employ contract workers who have now been rescued from an alleged human trafficking ring
Feb 12, 2019 3:31 PM By: Erika Engel 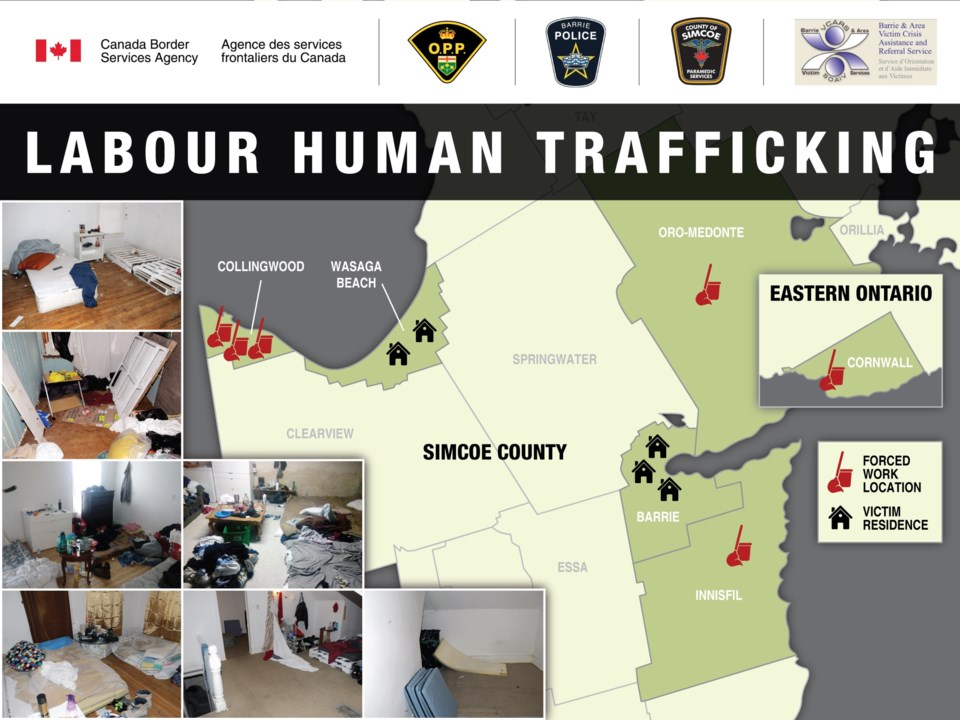 A map provided by OPP and the Barrie Police showing the locations of the forced work locations and the victims residences. Contributed image

COLLINGWOOD - Blue Mountain Resort has confirmed some of the victims rescued by police in a human trafficking case were or had been working in the resort’s hospitality department.

In a statement released Feb. 11 by James Henry, vice president of hospitality for Blue Mountain Resorts, he said his department has utilized RTL Services as a third-party labour contractor. The employees hired through RTL assisted during high-volume periods at the resort.

He said Blue Mountain Resort was unaware the alleged abuses were taking place.

According to information delivered in a press conference by OPP, Barrie Police Service, and Canada Border Service Agency yesterday, 43 victims of an alleged labour human-trafficking ring were rescued last week in what police are calling a “modern-day slavery” operation. Police reported the victims lived in poor conditions, their wages were mostly withheld, and the workers had to pay a fee for accommodation and transportation.

According to Henry, RTL produced proof their staff were covered under WSIB and had legal documentation to work in Canada.

“RTL also stated employees were housed and paid at least a legal minimum wage,” said Henry in his statement. “We were and remain deeply troubled by the allegations of human trafficking against this company, particularly due to the positive working relationships our employees have had with the workers from RTL.”

Henry described Blue Mountain’s experience with the contract employees as “excellent,” and said they were “known” to be “happy, engaged, and eager to work.” He said many attended social events and participated in gift exchanges over the holiday season.

“No indication of abuse or exploitation was given to our team,” stated Henry. “Had we suspected anything close to the nature of the allegations, we would have immediately alerted police.”

Blue Mountain Resort offered housing to the victims of the alleged human trafficking ring and also offered employment to those who were granted temporary work visas.

“None of our offers have been accepted at this time,” stated Henry.

In light of the allegations that have come forward and police reports of the living conditions and treatment of these contract workers, Blue Mountain Resort is “closely reviewing” its experience with an aim to improve its standards moving forward.

CANADA: Health Minister Hajdu says she went maskless at airport only while eating
Oct 26, 2020 10:20 AM