Amidst hugs, smiles and some tears, Ken Armstrong's family thanked their guardian angel
May 14, 2018 5:20 PM By: BarrieToday Staff 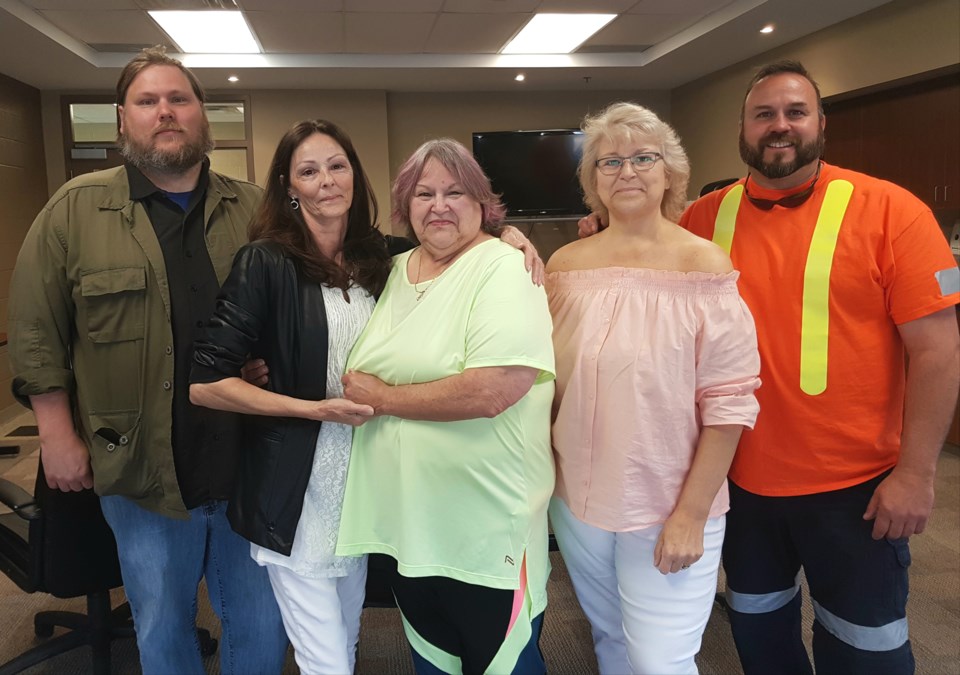 On Monday, May 14, 2018 Ken Armstrong's wife Melitha and their children Ken, Cathey and Darren had a private meeting with Sally Schutz at the North Division in Innisfil. Schutz is the Innisfil woman who found Armstrong when he went missing last week. Photo provided

Schutz is the Innisfil woman who found Armstrong when he went missing last week.

"It is wonderful to meet her," said a grateful Melitha. "She saved my husband and brought him home. I said Ken found his guardian angel and that's exactly what she is."

The 75-year-old Armstrong was the focus of an intense search after he wandered away from his Alcona home on May 7, 2018.  Search efforts involved South Simcoe Police, Barrie Police, the Ontario Provincial Police, York Regional Police, Go Transit Safety and Security, Innisfil Fire and Rescue and Georgian Bay Volunteer Search and Rescue.

Many community members also stepped up to try to find the missing senior.

Schutz decided to join the search, took a drive on Wednesday and wound up checking a wooded area near the 9th Line and 25th Sideroad.

That's where she found Armstrong curled up in the bush. Schutz held his hand and talked as they waited for emergency services to arrive.

"You're my hero for your age, your illness and you've been here for three days," Schutz recounted their conversation. "He just squeezed my hand and said, 'You're my guardian angel.'"

Armstrong, who has dementia and is diabetic, is recovering in hospital.

His family members expressed their gratitude again for the police and community response. They felt it was important to publicly acknowledge Schutz's efforts and let it be known in the community that it was a fellow resident that found Armstrong.

"I think it takes a special kind of person to see that call to action and go out and look for somebody," said son Kenneth, who thanked everyone who answered the call to help.

"It's so nice to meet her. My mom was expressing how she wanted to meet the woman who found my dad and say thank you," said daughter Cathey.

"We want to thank everybody," added son Darren. "The support was very overwhelming. The outcome was better than we expected. To meet her in person is just great. Thank her so much."

Schutz was gratified to meet Armstrong's family and share their happiness at the positive outcome of the search.

"To see all the smiles on their faces is just - isn't that what we all wanted? Everybody wanted the same outcome and they got it," said Schutz.